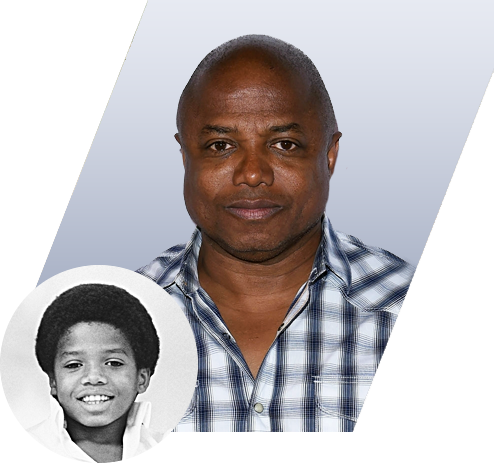 Randy Jackson was born on October 29, 1961 in Gary, Indiana and is the second youngest Jackson sibling, just ahead of baby sister, Janet. At age 11, Randy joined his older brothers in The Jackson Five playing conga. He is known for his wide reaching musical talent playing instruments such as the bongos, keyboard, drums, bass, and guitar.

Randy often performed with younger sister Janet, and the duo won fame on Dinah Shore’s show. In 1976, his brothers moved to CBS Records (from Motown) and changed their name to ‘The Jacksons.’ Randy was announced as the newest member of the group.

By the late 1970’s, Randy was preparing his first solo album titled, “How Can I Be Sure?, which featured the first recording of sister Janet, on a song titled “Love Song For Kids”. The album was not released, as Randy sustained many injuries in an unexpected car crash in 1979. Randy’s popularity grew, in particular with female fans, while on tour in the mid eighties. At this point, he founded the group “Randy & The Gypsys”, which released one album. In 1998, >Randy bought Modern Records from Stevie Wonder. That year, he and his brothers planned for The Jacksons to produce another album called “J5.″ However, the following year when it was officially announced, Michael chose not to participate and the record was never made.

In the 90s, Randy was appointed director of “MJJ Productions” (labeled “MJJ Music”) and oversaw the official website “MJJ Source”. He has also written and recorded many songs for Michael and sang lead for two songs on the 1984 Victory album.

In 2006, Randy founded THE RANJACK GROUP, headquartered in Los Angeles. President and CEO, Randy Jackson created the company to engage in a wide range of business related to entertainment, education and philanthropic endeavors. Randy is also in demand as a Strategic Business Advisor and Consultant to companies and celebrities. Never far from his musical roots, Randy continues to produce and record music.