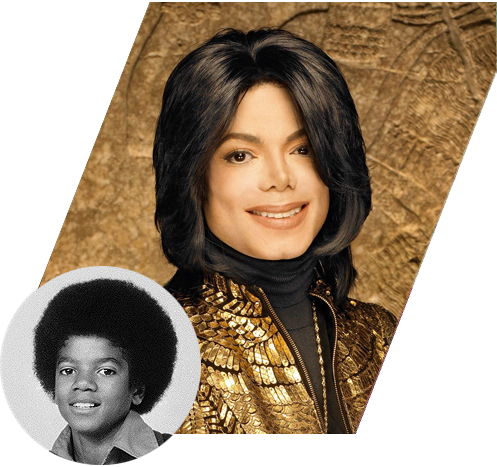 Michael Joseph Jackson was an American recording artist, entertainer, philanthropist and businessman. Often referred to as the King of Pop, Michael Jackson is recognized as the most successful entertainer of all time by the Guinness World Book of Records. The seventh child of the Jackson Family, he debuted on the professional music scene in 1964 at the age of six along with his brothers, Jackie, Tito, Jermaine and Marlon as a backup singer and tambourine player for the Jackson Five. Once signed to Motown in 1969, Michael came to the forefront as one of the lead singers.

In 1972, Michael debuted his first solo album, Got to Be There. Ben, Music & Me, and Forever, Michael followed this album under the Motown label. The Jackson Five then moved to Epic Records in 1975 under the name, “The Jacksons” to gain more musical autonomy and Michael and his brother began writing hit songs, such as, “Shake Your Body (Down to the Ground)”, “This Place Hotel,” and “Can You Feel It.” In 1978 Michael starred in the musical film The Wiz where he met Quincy Jones, who was arranging the film’s musical score. The two teamed up to produce Michael’s next solo album, “Off the Wall.” Selling over 20 million copies worldwide and earning multiple awards. “Off the Wall” catapulted Michael into super-stardom. His next album, Thriller, would become the greatest selling album of all time. Other legendary hits followed including: Bad, Dangerous, HIStory: Past, Present and Future, Invincible. and the postumously released album “Michael.”

In 1984, Michael donated all of the funds raised from The Jacksons Victory Tour to charity. He co-wrote the charity anthem “We Are the World” with Lionel Ritchie, which was recorded by 39 music artists. The song raised over $63 million for humanitarian aid in African and the US, and won four Grammy Awards. Then, in 1992, Michael founded the Heal the World Foundation – an organization committed to helping underprivileged kids around the world. Over the years, Michael has also donated to the United Negro College fund and many other organizations. During his career Michael sold an estimated 750 million records worldwide, released 13 number one singles and won 13 Grammy Awards. Michael received the American Music Award’s Artist of the Century Award, and became one of the few artists inducted in the Rock and Roll hall of Fame, twice.

Prince graduated with cum laude honors from Loyola Marymount University in Los Angeles in May of 2019 with a bachelor’s degree in business administration. He along with students launched the Heal Los Angeles Foundation Prince with a mission to strengthen and support children and families in need throughout the greater Los Angeles region by fighting child abuse, homelessness, and hunger. Prince along with his brother Bigi and cousin Taj Jackson, created a YouTube channel and show where they review movies. Prince is an avid bike rider and he is an rising movie director and prepared to set his own course, one that honors his father but does not imitate him.

Paris is a musician, model (represented by IMG Models), traveler, lightworker, humanitarian and activist. Paris debuted her music and singing career as one half of acoustic duo The Soundflowers with Gabriel Glenn to continue on as a solo artist making her debut with the album wilted in 2020.