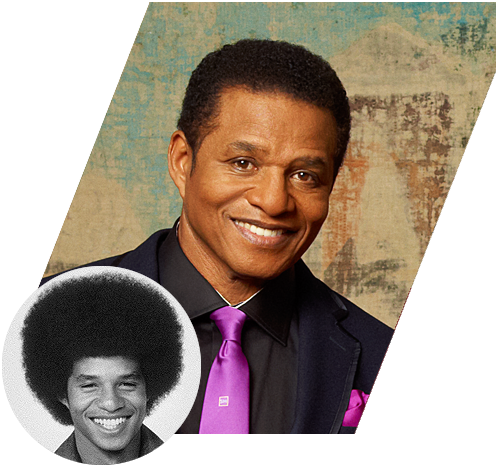 Jackie Jackson was born on May 4th, 1951 in Gary, Indiana – the eldest of the Jackson brothers. He started dance and tap lessons at age of four, and his signature high voice led him to become co-lead singer of The Jackson Five and The Jacksons.

In 1973, at the age of 22, Jackie released his first solo album, self-titled “Jackie Jackson”. In the early eighties, Jackie co-wrote songs for his sisters Rebbie and LaToya, and] produced various motion picture soundtracks such as “Touch and Go” (1986), “The Running Man” starring Arnold Schwarzenegger (1987) and most notably, the theme for “Burglar” (1987) starring Whoopi Goldberg. In 1989, Jackie released his second solo record with Polygram, titled “Be The One”, which included two releases that would top the charts for over four months. In November 2010, Jackie returned to the music scene with the release of his single, ‘We Know What’s Going On’. Jackie also released a collaborative version of “We Know What’s Going On” with the South African artist Jacques Terre’ Blanch.

Jackie is most proud of his work, which focuses on charities and people in need. He has been instrumental in raising tens of millions of dollars to fund research for Aids, Cancer and Diabetes, and to help end homelessness among children in Africa. With tremendous support from the Los Angeles Lakers, Jackie is an active board member for the non-profit organization “Its Time For Kids” and provides hands on teaching to inner-city children about the creative process in the studio, after which they sing and record a song together.

In 2010, Jackie completed the first season as an Executive Producers of the reality show, “The Jacksons: A Family Dynasty” on the AE Network. Jackie has also become a consultant for his brother Michael’s Estate, keeping his brother’s musical and humanitarian legacies alive through various endeavors such as the Michael Jackson/Cirque du Soleil collaboration. Jackie is currently in the studio producing music for numerous artists with his partner Steve DuBerry. His love for music prevails through his artist mentorships under his current music label Critically Amused.

In 2020, together with his wife Emily, Jackie joined forces with Robert Milder, the founder of dutch-based sustainable furniture brand Van de Sant. With their shared vision, they are committed to ensuring that we will reshape this world for many generations to come. Together, they will bring sustainability straight to your living room to make this world a better place.