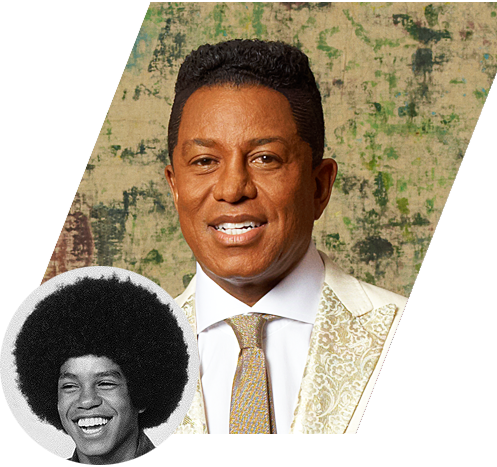 Jermaine was born on December 11, 1954 in Gary, Indiana. Growing up a Jackson, and performing in the living room with his brothers, Tito and Jackie, Jermaine quickly felt the music in him.

Life in the studio, on the road, and in front of the camera, made Jermaine a recognizable figure within the Jackson Five in the 60’s. Feeling the itch of pursuing his individual creative path, Jermaine’s solo career began in 1972 with the platinum cover of the R&B classic “Daddy’s Home” – a Motown Record’s Release which became a Billboard Top-Ten hit. “Let’s Get Serious,” “Let’s Be Young Tonight,” “Do What You Do,” “Don’t Take It Personal” (# 1 on Billboard’s R&B charts) were successful singles that followed.

In 1976, while the rest of his brothers signed with CBS, Jermaine stayed at Motown. His decision shocked his brothers, who were a tight-knit group, and also shocked and upset fans worldwide. His brothers continued with CBS, and recorded five albums as “The Jacksons” as they continued to sell out stadiums around the world. Jermaine rejoined his brothers in 1984 to collaborate on the Victory album and subsequent Victory Tour.

In 2010, Jermaine performed a solo concert in Gambia for the International Kanilai Cultural Festival before 30,000 excited fans at Bakau’s Independence Stadium. He was co-executive producer of The Jacksons: An American Dream and The Jackson Family Honors special for NBC, which benefited charities.

In 2010, Jermaine completed the first season as an Executive Producer of the reality show, The Jacksons: A Family Dynasty on the AE Network. In 2011, Jermaine released a book with his memoirs titled: “Michael: You Are Not Alone, Michael: Through A Brother’s Eyes” which is an intimate, loving portrait of his brother Michael, illuminating the private man like never before. In 2013, the book was fully revised and updated. The book is an Amazon and New York Times best seller.

Jermaine has moved on beyond the music in the worlds of entertainment, hospitality, jewelry, watches, food and beverages and more.